Academic cheating and the accompanying problems with academic integrity has always been a pain in the neck for educational institutions. Every year, university honor codes are becoming more and more complex and thoughtful, but it does not help them completely overcome the problem of violation of academic integrity and dishonesty within their walls. 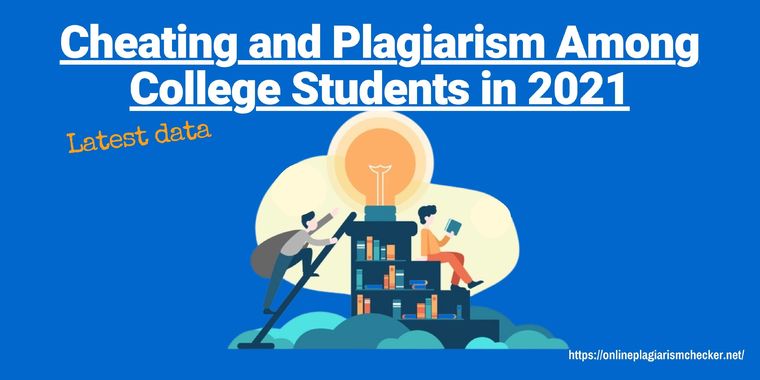 OnlinePlagiarismChecker decided to study this issue and collect statistics on student honesty in 2021, taking into account the changes that quarantine has brought to our lives. We organized a survey of over 2,500 students and supplemented it with our internal plagiarism test data to provide a clear picture on this issue. 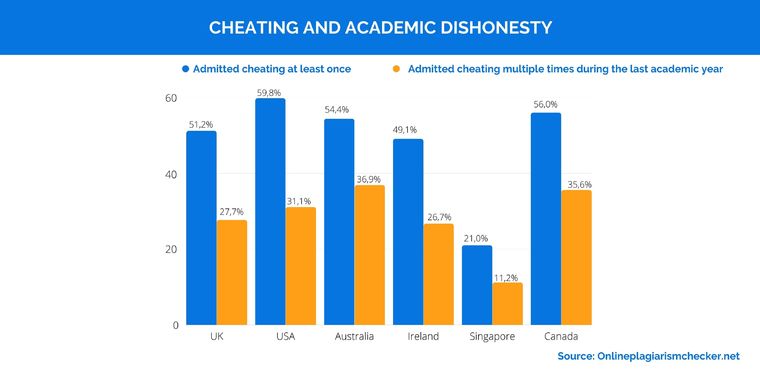 The next question for us was the desire to study how often an English-speaking student that admitted cheating cheats on average. We asked those who admitted cheating at least once how often they thought they were cheating or doing what they believed to be dishonest academically within one year. The results showed that in the majority of the studied English-speaking countries, students cheat 1-3 times per academic year. 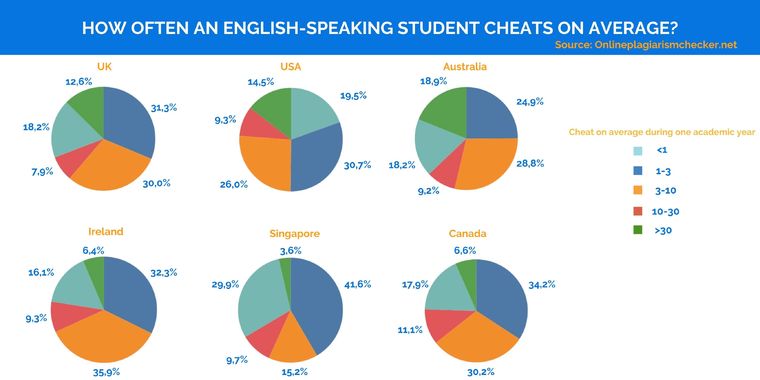 Many studies have examined the effect of distance learning on the frequency of dishonest academic behavior. This question is just as acute among teachers. Among the students who admitted to having cheated in the past, 57.8% indicated that they began to cheat more when they were enrolled in remote learning. 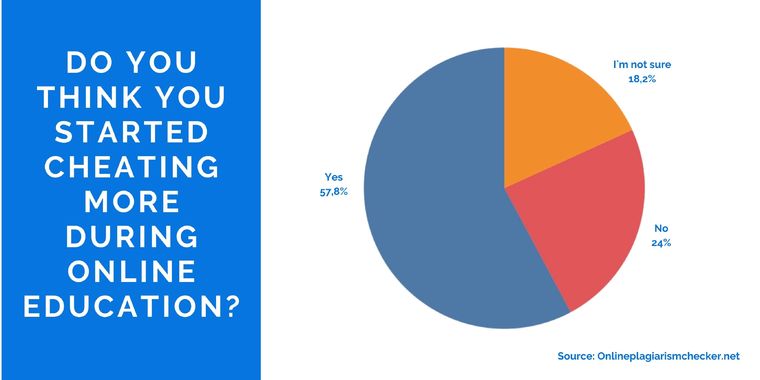 At the same time, more than 75% of students said that they knew or saw other students cheating. It means that 3 out of 4 students of higher institutions know about the facts of academic dishonesty. And only 3.7% have ever reported about the problems they noticed to the appropriate educational authorities of their institution. 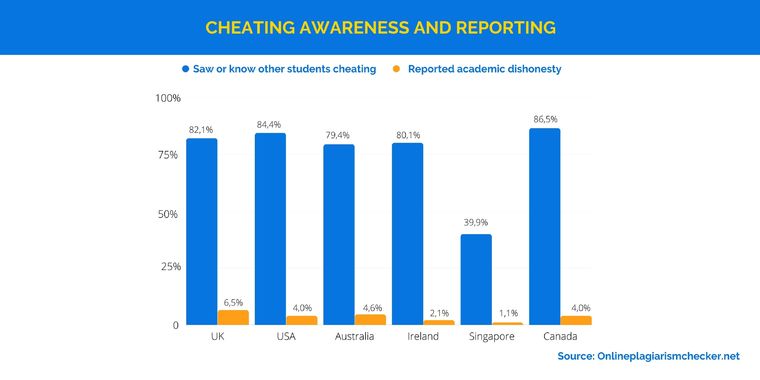 Another problem identified is the inability for professors and academic institutions to effectively identify people involved in cheating. The difficulty of determining whether a cheating has occurred has always been acute for universities and has become even more serious with the advent of online learning. According to the results of the survey, among those who were involved in cheating at least once, only 7.5% were caught. 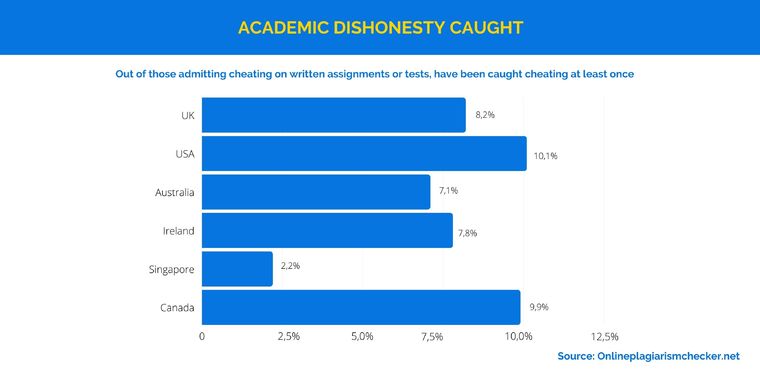 Speaking about the types of cheating that students indicated who admitted to having changed at least once, the largest percentage is cheating on written assignments and working on individual work in a group. Others included plagiarism and the use of prohibited materials or other formats of cheating on tests in offline or online mode. 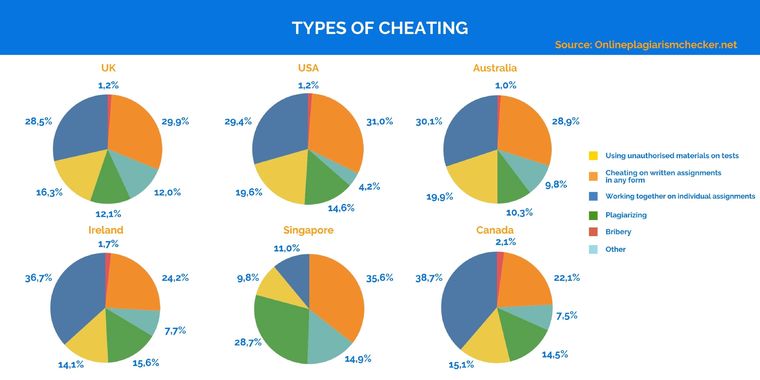 As a platform to fight plagiarism, we were interested in finding out how often students engage in intentional plagiarism. Plagiarism is one of the harshest manifestations of dishonest academic behavior and can seriously affect both the reputation of the student and their professor.

Among all surveyed students, on average across all regions, 12.2% admitted that they had ever plagiarized or used someone else’s words in their academic work without proper referencing. Of these students, only 20.3% were caught plagiarizing, which is higher than the catch rate for other cheating formats, but still quite low. 4 out of 5 students were left unpunished after the fact of their plagiarism. 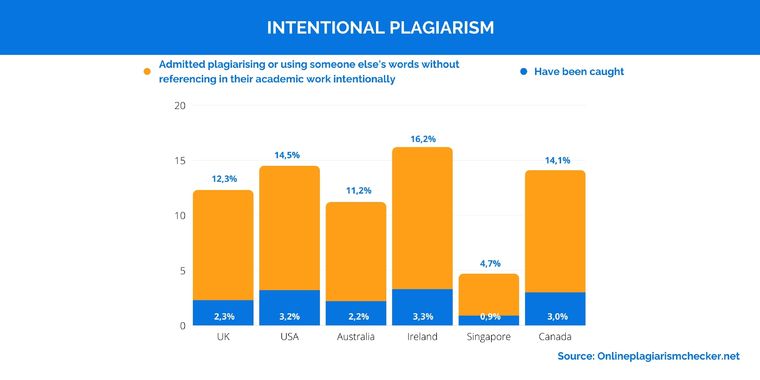 On average, 2% of students indicated that they had ever used so-called essay mills (services for writing academic papers for money) or asked someone else to write an academic paper for them.

Among the reasons that students indicated as the main reason for plagiarism on their part were lack of time (37.1%), misunderstanding or too difficult a task (31.5%) and lack of interest in a particular course (11%).

How Much Time Does Plagiarism Take from Us

To supplement the statistics, we collected our internal data from users who use our tools to detect plagiarism. We wanted to know how much time people spend improving their work and fighting plagiarism.

The data showed that, on average, a user checks 2.4 different works or documents per session and each check has 3.9 edit sessions before checking the document again. Our user spends 8.7 minutes for each edit session, which results in 34 minutes of working on plagiarism in just one small-sized document of 4.3 pages (1174 words) - a classic university essay would be about the same size.

An average student writes about 190 pages of written assignments per semester. It sums up to 1,502 minutes per semester or 50.1 hours per year of simply checking and fixing plagiarism issues.

Download the press release with a full data set and comments on the study from OnlinePlagiarismChecker here.